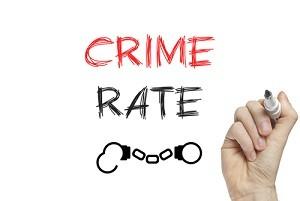 Violent crime has seen a marked decrease in the past decades, leading many U.S. citizens to feel more secure than ever before. Just as violent crimes—such as rape, murder, and assault—have decreased in recent years, the rate of property crime has as well. Despite a national economic climate that some would say leads to a higher rate of non-violent property crime, over the five-year period between 2006 and 2010, there was more than a 12 percent drop in property crime. The 2010 rate of property crime (how many incidents per number of 100,000 residents) was about 2,9400—a marked decrease from 3,660 in 2001 and 3,350 in 2006.

There are several types of property theft as defined by the Bureau of Justice Statistics. These include (but are not limited to): burglary, larceny, theft, and motor vehicle theft. Burglary is the forcible breaking and entering to an unauthorized location, and usually involves charges of theft as well. Motor vehicle theft is the stealing of a car or other type of motor vehicle. Larceny is the unlawful taking of property—other than a motor vehicle—without force. That is, pickpocketing or shoplifting would be considered larceny. A charge may be increased to grand larceny depending on the value of the stolen items.

Beginning in the 1990s and continuing today, increased incarceration rates seemingly have deterred many from committing non-violent property crimes. Other reports attribute the decline in this type of crime to more effective law enforcement. And yet many statisticians say that, while these types of crime have continued to decrease while incarceration rates increase, the correlation is not so simple. The aging population may influence this as well, as may the fact that the number of police on the street continues to grow. Some reports note that the increased incarceration rates only accounted for 6 percent of the property crime decline in the 1990s, and only 1 percent in the 2000s. There is also the issue that some statisticians are drawing conclusions by making a comparison between two disparate cities or communities, leading to a simplistic or incomplete analysis.

If you are accused of a property crime, it is imperative to speak with a legal professional immediately. Do not go through it alone. Contact an experienced Fairfield Country criminal defense attorney today. At the Law Offices of Daniel P. Weiner, we are committed to helping you protect your rights and secure your future, no matter what the charges you may be. Call 203-438-5846 to schedule your free consultation today.