Americans Know Distracted Driving is Dangerous, But They Still Do It
Iniciar chat en espanol
Blog
View All Practice Areas
Subscribe via RSS

Americans Know Distracted Driving is Dangerous, But They Still Do It

Posted on September 02, 2014 in Criminal Defense 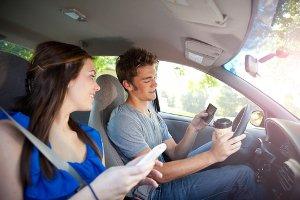 According to a recent Harris Poll, adult drivers are engaging in risky behavior, including texting and talking on cell phones, even though they know it is dangerous. Distracted driving can result in traffic violations that not only subject you to stiff fines, depending on the number of offenses you have, but can also lead to crashes resulting in vehicle damage, injury, and even death.

Adult drivers are also engaged in other distracted driving behaviors behind the wheel. Twenty-seven percent report engaging in personal grooming such as shaving, applying makeup, or styling hair; 24 percent have posted to social media sites; 19 percent have read a book, magazine, or newspaper; and 13 percent have watched a video on a smart phone or tablet.

While many adults report riding as a passenger in a car with a driver who engages in distracted driving, 69 percent do not believe that a passenger in such situations should share legal liability if the driver causes an accident.

What to Do If Your Distracted Driving Causes an Accident

If you have been charged with causing an accident due to distracted driving, contact an experienced Connecticut criminal defense attorney for help with your case. It is important to have an experienced attorney reviewing the details of your case with you so that your rights are protected.