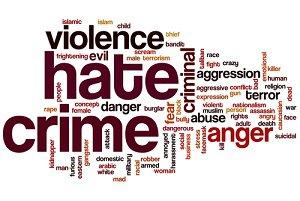 The incidents of several different types of crime rises during the holiday season, likely due to increased stress levels, demands for money, and pervasive societal stress and expectations. Sadly, hate crimes are no exception to these trends. The rate of hate crimes spikes during the holidays both likely due to the aforementioned social quandaries, but also because of the holidays themselves—hate crimes against the Jewish community especially seem to spike during the holiday season, and this even more-so on the East Coast, where cities are comprised of large percentages of citizens who identify with the Jewish faith. In 2015, as terrorist attacks continue to infiltrate the fabric of everyday Western life, the rate of hate crimes against Muslims will likely keep pace as well.

Regardless, the highest rate of hate crime incident continues to be racially-motivated, at 47 percent nationwide. Hate crimes motivated by religious identification or sexual orientation are tied at second, each accounting for nearly 19 percent of all reported incidents of hate crimes. In Connecticut, a hate crime does not have to be defined as an act of physical violence or physical action. A hate crime can also be defined as a crime of intimidation, which includes criminal harassment or being threatened. A person can be charged with criminal harassment if the alleged victim can prove that he or she was being repeatedly followed, that the person repeatedly called the person’s place of work or home (either directly or through contacting a mutual acquaintance), or if a person receives threatening letters or emails.

This slips into the category of criminal intimidation if a person threatens to force you to do something or to prevent you from doing something through physical actions: Defacement of personal property, including a car or home; unauthorized surveillance of one’s place of work or home; or simply by threatening violence. In Connecticut, offenders convicted of criminal intimidation can be subject up to a five-year prison sentence.

If you or someone you know has been accused of a hate crime, even if there was no physical violence involved, do not go through it alone. Contact an experienced Fairfield County criminal defense attorney today.