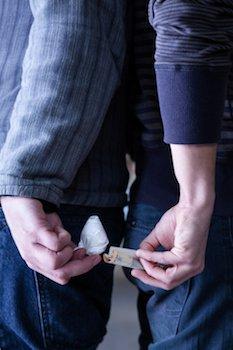 A 29-year-old man was charged in late December for allegedly “operating a drug factory out of his Springdale apartment,” according to the Stamford Advocate. Ronald Taranto is facing multiple drug charges after police obtained a search warrant and searched his home, only to find cocaine, marijuana, heroin, and prescription drugs, the Advocate reports. “Taranto was charged with two counts of narcotics possession, possession with intent to sell, possession of marijuana, possession of a controlled substance, and operating a drug factory.”

Police were tipped off the Taranto’s activity by neighbors who complained about his behavior. Stamford Police kept an eye on the man’s apartment for several weeks before making the bust. He was charged with intent to sell because police were able to seize “28 bags of powdered cocaine… 16 folds of heroin and 11 film packets of the prescription drug Suboxone—a drug used to treat opioid dependence,” according to the Advocate.

According to Connecticut State Law, the sale of one or more ounces of heroin, methadone or cocaine is a felony and carries and minimum term of five to 20 years in prison. The sentence cannot be suspended unless “the person was under the age of 18” at the time of arrest or the person’s “mental capacity was significantly impaired but not so impaired as to constitute a defense to prosecution.”

Connecticut is “one of the top ten states for dependence on illicit drugs among young adults age 18 to 25,” according to a White House fact-sheet. About 8 percent of Americans nationally admit to using any illicit drug in the past month—the percentage was slightly higher for Connecticut residents. Heroin, which was found among Taranto’s possession, is the most commonly cited drug in drug treatment admissions. According to the White House, “as a direct consequence of drug use, 444 persons died in Connecticut in 2007.” This is more than the number of people who died from motor vehicle accidents (309) and firearms (149) in that same year.

If you or someone you know is facing drug charges in Connecticut, the most important first step is to seek legal counsel. Don’t go through it alone. Contact the Law Offices of Daniel P. Weiner today.