Technology to Catch Drivers Who Text is in the Works

Posted on December 16, 2014 in Traffic Violations 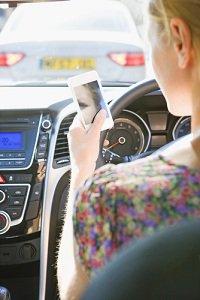 It is well known that texting while driving can be as dangerous as drinking and driving, yet today it is a common traffic violation. A Virginia company is developing a new technology that would give the police a device to use to identify when a driver is texting behind the wheel.

In Connecticut, typing, reading, or sending texts while operating a vehicle is prohibited by law. This prohibition applies even if the vehicle is temporarily stopped at a stop sign or light or is stopped due to road conditions or traffic. The fines are $125 for a first offense, $200 for a second offense, and $400 for a third or subsequent offense.

The device can detect the specific radio frequencies that are used when someone is using a cell phone to send text messages. It can distinguish between the frequencies used to send text messages, make phone calls, and transfer data. However, the developer of the technology would have to address certain issues such as determining who was doing the texting when more than one person is in a car.

If you have been charged with texting while driving or any other traffic violation and need legal counsel, contact an experienced Stamford defense attorney for help with your case. Call the Law Offices of Daniel P. Weiner at 203-348-5846 today for a free initial consultation.
Tagged in: Connecticut criminal defense new device police sending texts Stamford traffic violations lawyer texting while driving connecticut traffic defense